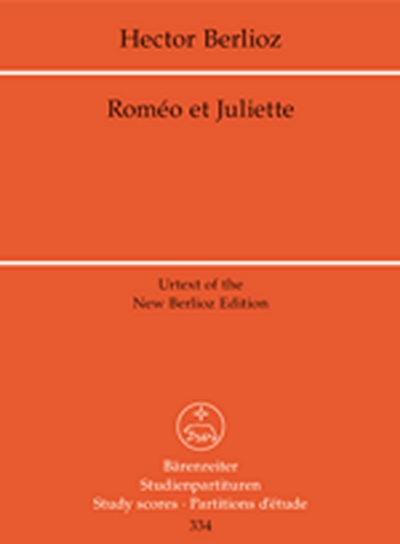 Romeo et Juliette Op. 17 Hol. 73: Symphonie dramatique For his third symphony ; Romeo et Juliette (1839) Berlioz turned to his greatest literary passion, Shakespeare, drawing once again on his own most fervent experiences. Berlioz's discovery of Shakespeare in 1827 had been overwhelming not only for the dramatic force of the poetry and drama, but also because the leading actress of the company, Harriet Smithson, immediately won his heart. She later became his wife. He began to think seriously about composing some kind of musical ; Romeo and Juliet but it was not realised until 1839. The symphony is scored for doublechorus (to represent the two warring families), solo voices as secondary characters, with the lovers themselves represented by the orchestra. Urtext of the New Berlioz Edition Full score (BA5458), vocal score (BA5458-90) and study score format 22. 5 x 16. 5cm (TP334) available for sale T65Performance material (BA5458-72) available for hire