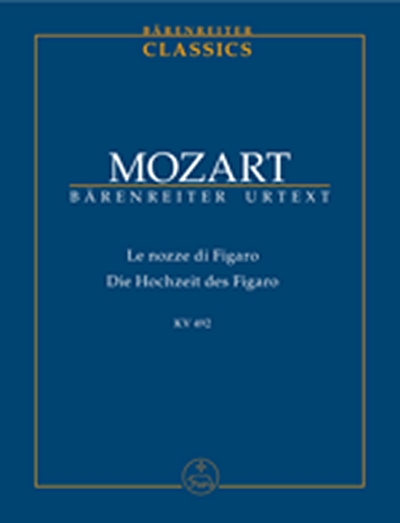 Premièred at the Vienna Hoftheater on 1 May 1786, Wolfang Amadeus Mozart’s and Lorenzo Da Ponte’s Le nozze di Figaro may be safely regarded as one of the greatest operatic successes of all times. Yet its success was not entirely due to Mozart’s music: on the contrary, because of the extraordinary demands it placed on the orchestra (especially the woodwinds), the music even posed an obstacle to the work’s spread outside the German-speaking countries. At least equally responsible for the opera’s success was the librettist Lorenzo Da Ponte, who managed to transform a topical and socio-critical stage play into an opera libretto as effective as it isamusing. Many of the sources for Mozart’s first opera from the Lorenzo Da Ponte trilogy only became available to scholars again after the ‘New Mozart Edition’ volume was published. These include the autograph scores of acts 3 and 4, now held at the Biblioteka Jagiello ka in Kraków, significant portions of the original sets of parts and acts 2 to 4 of the conductor’s copy from the first performance of 1786. These original sources, now available again, offer compelling solutions to several previously unresolved questions. Edition based on the Urtext of the ‘New Mozart Edition’ reflecting the latest musicological research With findings from original sources now available again Detailed foreword (Ger/Eng) Full score (BA4565-01), Vocal score (BA4565-92), study score format 22. 5 x 16. 5cm & Facsimile (BVK1882) available for sale V43 Performance material (BA4565-72) available to hire