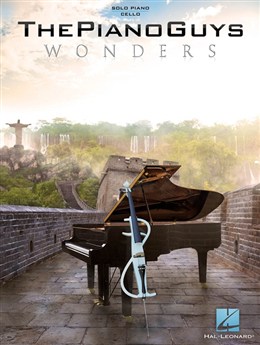 Ants Marching/Ode To Joy
Batman Theme
Because Of You
Don't You Worry Child
Father's Eyes
Home
How Great Thou Art
Kung Fu Piano: Cello Ascends
Let It Go (from Disney's Animated Feature Frozen)
Like A Dog Chasing Cars
The Mission
Pictures At An Exhibition
Story Of My Life
Summer Jam

The Piano Guys' 2014 release debuted at the top of the New Age albums chart and also topped the Classical Albums, Classical Crossover Albums and Internet Albums charts and took them into the top 12 on the Billboard 200 for the first time.
Their arrangement of Let It Go (from Disney's Frozen) from this album has received over 37 million views on Youtube.
Wonders features 14 more of their unique and creative arrangements.
This book features Piano arrangements with separate pull-out Cello part.
The Piano Guys are on tour in the UK (Birmingham, Nottingham, Manchester, Edinburgh and London) and Europe (Paris) in June 2015.