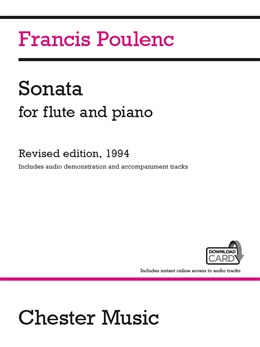 This is an updated edition of Francis Poulenc's 1957 work Sonata For Flute And Piano, edited by Carl Schmidt. Featuring the full score and separate Clarinet part, this exclusive edition also includes a download card, giving you instant online access to demonstration and accompaniment tracks.

After having begun a Sonata for Flute as early as 1952, questions arose over whether Poulenc would be able to complete this work on top of his various other compositions at the time. The piece was, thankfully, finally finished after being commissioned by Harold Spivacke, the Chief of the Music Division of the Library of Congress, for a festival in honour of Elizabeth Coolidge. The world premiere, at Poulenc's request, took place at the Strasbourg Music Festival, performed by renowned flautist Jean-Pierre Rampal, while the American premiere took place in the Coolidge Auditorium at the Library of Congress.

This new edition includes an extensive introduction to the piece, a detailing of the different sources that were used, and the inherent difficulty of compiling such an edition as this, all in English, French and German. Furthermore, an in-depth discussion of the problems of authority, as well as a vast number of critical notes is included, giving a true sense of the care and attention that has gone into producing this new edition of Poulenc's Sonata For Flute And Piano. At all points, Schmidt has aimed to reproduce an authoritative and accurate score that is at once playable and a reflection of what Poulenc himself may have intended.

What makes this edition of Sonata For Flute And Piano really special is the unique download card that provides exclusive online access to demonstration and accompaniment audio tracks. Professionally-recorded by renowned flautist Michael Cox and pianist Huw Watkins, the demonstration track allows you to hear exactly how the piece as a whole should sound, before the independent Piano-only track lets you take the place of the flautist in your very own performance. This is a unique opportunity for flautists to learn from an authoritative score, and play along to a special backing track, with a work that, since its premiere, has become one of the most frequently-performed and well-loved works in the Flute repertoire.

For flautist fans of Francis Poulenc, lovers of Les Six, or just players with a proclivity for stunning music, this edition of Sonata For Flute And Piano has been a long-time coming, and now it's available in this unique edition with accompanying download card.