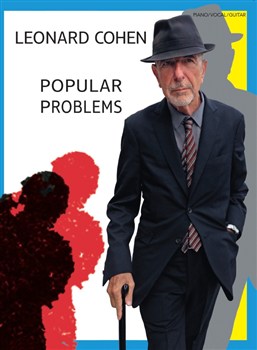 Popular Problems is the thirteenth studio album by legendary singer-songwriter Leonard Cohen. This Popular Problems sheet music features all of the songs from the album arranged for Piano, Vocal and Guitar.
Released a day after his 80th birthday to wide critical acclaim, Leonard Cohen's thirteenth album is a dark and understated work featuring Cohen's distinctive voice, his poetic lyrics and some bluesy instrumentation. Featuring songs like Slow, Almost Like The Blues and You Got Me Singing, the album is a throwback to those dark American dive bars where the smell of smoke and whisky blends with the sounds of a deep and croaky voice.
On Popular Problems, this voice comes from the legendary figure of folk music whose mysteriously cryptic lyrics made their way onto the scene in 1967. After struggling as a poet and novelist, Cohen turned his hand to folk songs which, like Bob Dylan before him, he was perfectly suited to. Our Popular Problems sheet music features accurate transcriptions of all the songs from the latest offering from this old master of folk music.
The album is a subtle and quiet one, with beautiful lyrics, simple melodies and some interesting music that ranges from Piano chords to folk Guitar strumming. There are even a few unexpected surprises such as the Middle-Eastern influences on the song Nevermind. These little touches keep the album interesting and exciting while retaining the essence of Cohen's past music.
This Popular Problems songbook would be perfect for the Leonard Cohen fan, the singer-songwriter looking to learn from a master, or just someone who loves great music by a great musician.