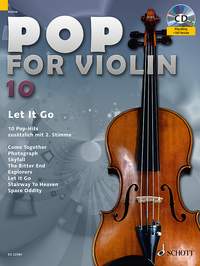 Who says you can't play pop music on stringed instruments?!

This tenth volume of the successful Pop for Violin series offers plenty of material for those string players who don't wish to be confined to playing classical music. Arranged specially for the violin, these pieces are easy to play and sound great!. Volume 10 of the Pop for Violin series presents a special selection of hits that made pop history: 12 rock songs, be it classics by David Bowie or Led Zeppelin, and modern rock hymns by Placebo or Muse have been arranged specially for the violin, thus providing new sounds in music lessons or while playing at home.

The included CD contains each piece in both demonstration and play-along versions, making practicing even more fun. In addition, a second violin part is provided for every piece.