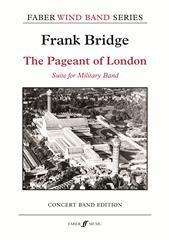 Frank Bridge was one of the finest English composers of the first half of the 20th century. The Pageant of London is his only work for wind band, comprising of two marches, one scored from Bridge’s best known organ piece and including the chimes ofBig Ben, plus three short renaissance pastiche items, one arranged from Playford (later used by Peter Warlock in Capriol Suite). The music is tuneful, approachable and, in the words of wind band ‘legend’ Timothy Reynish makes a fine alternative toHolst’s two suites, which were composed around the same time. Reynish has introduced this work to concert bands right across the world. It has been performed in USA and the Far East, recorded by the celebrated Kosei Wind Orchestra of Japan and alsoby the BBC National Orchestra of Wales in the Chandos edition of Bridge Orchestral Music.