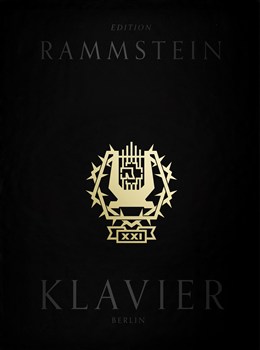 To mark the band's 21st anniversary, Rammstein are releasing the luxurious songbook Klavier with 13 arrangements for Piano and Voice, including a CD with 13 Piano recordings - all in an elegant hardcover edition.

The music of Rammstein has been described as like listening to the construction of monumental buildings in the desert. If that is the case, such an imposing structure has been worked on over 21 years already. With album and DVD sales in the upper seven figures, Rammstein's output is at once controversial, creative and always exciting. This and their headline shows at the biggest festivals and sold-out arenas throughout the world have put this band at the top of a great pyramid of rock music titans in just two decades.

They owe their status as an unmatched performing band to their unique art which is dramatic, emotional and a bleak and spectacular fairytale, always courting controversy. Such a fascinating band means this lavish songbook is fitting. Featuring 80 pages, a hardcover design with open-thread stitching and hot foil stamping of the 'Rammstein XXI' logo, this book is perfect for fans of Rammstein who want to learn the wonderful music for Piano and Voice.