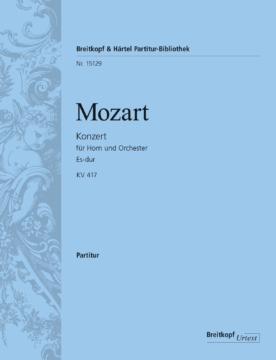 Wolfgang Amadeus Mozart's horn concertos: the Mozart expert Henrik Wiese edits the central work genre of Viennese classicism according to the current status of international Mozart research. Mozart wrote the Horn Concerto K. 417 - like the other works of this genre as well - for his horn-playing friend Joseph Leutgeb. The jokes which the composer made at Leutgeb's expense are wellknown. For example, he called the dedicatee a "donkey” in the autograph, and, as Henrik Wiese evidences in his preface, Mozart also occasionally enjoyed a bit of tomfoolery with the soloist in the musical text as well.
Otherwise the editor's task was anything but amusing. The main source - the autograph score - is incomplete: missing are the close of Movement I as well as the entire slow middle movement. For these two sections, Wiese used a copy of the score from the archive of the publisher Johann André. The unusual circumstance that Mozart generally left the horn part almost unmarked recurs in the Concerto K. 417 and was deliberately maintained in the Urtext edition.