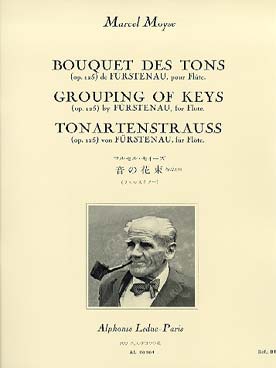 Written by the French flautist and composer Marcel Moyse, Grouping of keys, Op. 125 by Fürstenau is a set of studies and exercises on keys for advanced players, as it is considered as quite difficult. Arranged by Marcel Moyse, Grouping of keys, Op. 125 by Fürstenau was a work originally by the German flautist Anton Berhnard Fürstenau. It would definitely complete the series of work by Marcel Moyse also published by Alphonse Leduc, such as 'Gammes et Arpèges' (1933), 'De la Sonorité' (1934) and 'Mécanisme-Chromatisme' (1927) among others. Considered as a maestro by some musicians, Marcel Moyse (1889-1984) has written various Flute studies and exercises books, that comprisesan excellent method for all levels.