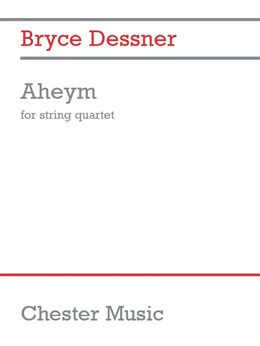 This is the full score of Aheym for String Quartet, composed by Bryce Dessner, best known as the guitarist of The National, but also an acclaimed composer in his own right.

Composed in 2009 for the Kronos Quartet for their performance in Brooklyn's Prospect Park for the Celebrate Brooklyn! festival, Aheym (meaning 'homeward' in Yiddish) was directly inspired by his grandmother's migration to America. Dessner states that the stories and information she used to tell them permeated their collective imagination and created a close connection to the past. He dedicates Aheym to his grandmother, Sarah Dessner.

The score in this edition was first performed on the 12th of March 2009 at the MusicNOW Festival, and on the 18th of July 2009 in Prospect Park, Brooklyn. The work lasts around 10 minutes and is filled with dynamic tempo changes, a mix of staccato and smooth playing and all-round excitement. It's a fantastic piece to play and the genius composition will keep audiences on their toes.