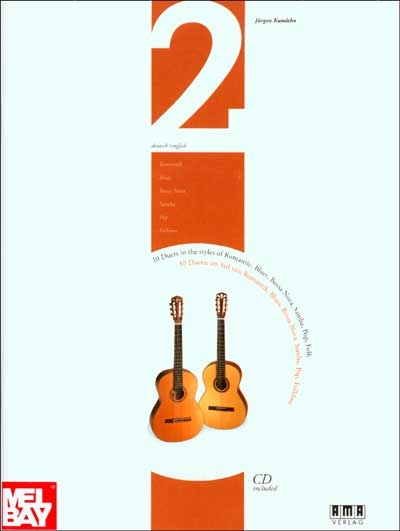 This book is for all guitarists who are looking for something new to play and who don't want to limit themselves exclusively to the more traditional type of duet music that's available. Stylistically, the pieces range from romantic, blues and bossa nova to samba, pop and folklore. The included CD contains every piece in two different versions as well as a preparatory exercise. First, there's a complete version for listening with an expanded and properly mixed arrangement. In this version, supporting instruments such as percussion, electric piano, strings, or acoustic bass are added in an appropriate manner for the style and mixed in softly without distracting the focus from the two guitars. After every listening version, a 'picking pattern' follows: the rhythm guitar performs and stays with this picking pattern throughout the entire piece and it forms the common thread that represents the actual core of each composition. This pattern is also presented on the CD in a slow version of a representative section of each song which you can analyze and play along with. Finally, you'll find the play-along version. This version has been reduced to only the two guitars, with one guitar on the left channel and the other on the right. Written in notation and tablature. Text in English and German.