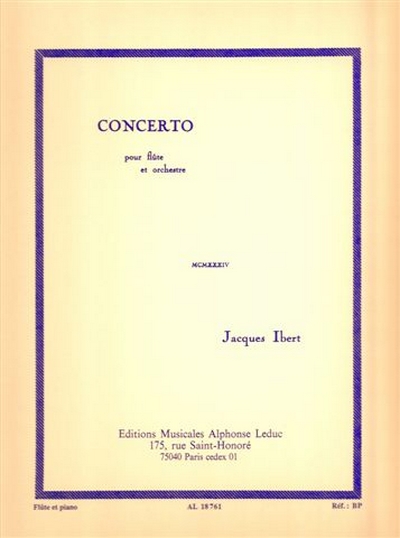 Published in 1934, this is one of the most frequently interpreted flute concertos, by Jacques Ibert (1890-1962), a neoclassical composer who won the Prix de Rome in 1919. Written for the French flautist Marcel Moyse, it is rated as difficult and is composed of three movements: Allegro, Andante and Allegro Scherzando. The first, Allegro, is challenging with a rapid suite of sixteen notes followed by a theme more lyrical. Andante, the second movement, is lyrical and recalls its suites Escales (1924). Finally, Allegro Scherzando reminds us of French drama through its theatricality and can be difficult for the soloist due to itsrhythmic part. Jacques Ibert (1890-1962) also composed many symphonic suites, operas and seven orchestras, including Angelique (1926) and Divertissement (1930). He also was in charge of the Accademie de France in the Villa Medicis (Roma) and was later administrator for the Paris Opera.