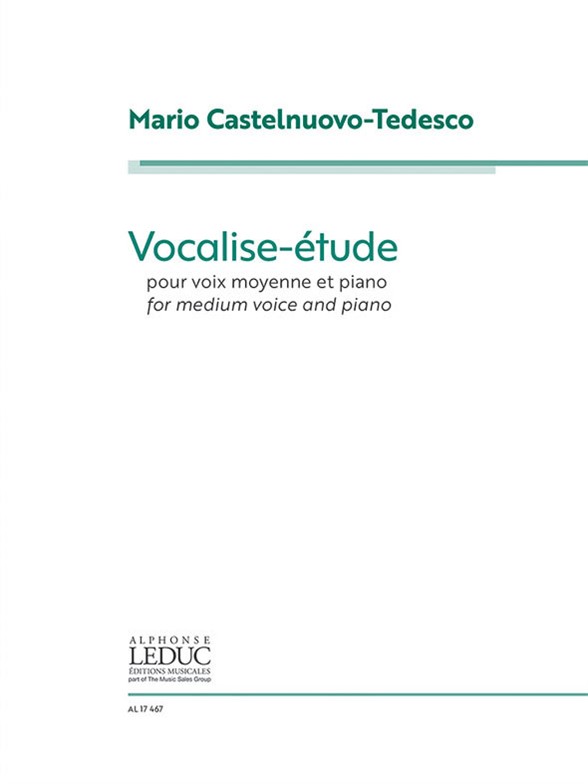 Born into a family that had lived in Florence since the expulsion of the Jews from Spain in 1492, Mario Castelnuovo-Tedesco (1895-1968) entertained only a distant relationship with the music he heard at synagogue. It was only when he discovered Schelemo, a rhapsody for cello and orchestra written in 1916 by Ernest Bloch, that he began to understand what "
Jewish music” could be.

In the mid-1920s, the young composer found a collection of prayers set to music among his maternal grandfather'
s papers. Something clicked, and from then on, Jewish tradition would become a source of inspiration for Castelnuovo-Tedesco. In 1928, two years after publishing the Dances of King David, he wrote this Vocalise-E
tude for medium voice and piano at the request of vocal teacher Amédée-Landély Hettich, who wanted to include it in the Répertoire moderne de Vocalises-E
tudes published by Leduc. The piece became so popular that several instrumental adaptations were soon created, published under the title Chant hébraïque (for violin and piano: AL17 713- for cello and piano: AL 17196).

Divided into three sections, this wordless melody opens with a "
sad and impassioned” chant that appears to grieve the tragic fate of the Jewish people. A folk dance follows, in which a "
lively and stubborn” movement has great panache. The third section returns to the initial poignant theme before briefly reiterating the dance motif, allowing the piece to conclude on a hopeful note. The composer himself would adopt this proactive stance, refusing to yield to resignation when, fleeing Mussolini'
s anti-Semitic laws, he decided to emigrate in 1939 to the United States, a land of refuge to which he would remain faithful until his death some thirty years later.