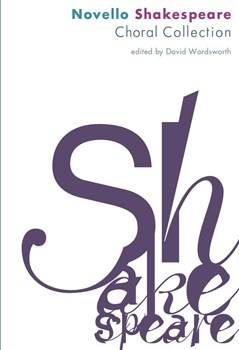 Music played an enormous role in the works of William Shakespeare, while his own sonnets, poems and soliloquies have provided continuing inspiration for many composers through the years. The Novello Shakespeare Choral Collection, inspired by the 400th anniversary of the Bard's death in 2016, is an exciting anthology of choral works that are settings of Shakespeare's words. For choirs of all types and abilities, this collection has been edited by David Wordsworth so that all the pieces are fantastic both to sing and hear.

The collection features some beautiful settings that have well and truly stood the test of time, such as Thomas Arne's Blow, Blow, Thou Winter Wind and Henry Leslie's How Sweet The Moonlight Sleeps. More recent settings from 20th century and contemporary composers include Ernest Moeran's Sigh No More, Ladies, Gary Carpenter's Lo, Here, The Gentle Lark and John Tavener's Fear No More and Look In Thy Glass.

Not only this, the Shakespeare Choral Collection boasts several works that were specially commissioned, including John Joubert's Be Not Afeard, Richard Sisson's Light Thickens and Pawel Lukaszewki's Weary With Toil, I Haste Me To My Bed. Some pieces have never appeared before in print, such as those by Kevin Olsen, Bernard Hughes and John Gardner. These songs truly are a joy to perform, with some relatively simple arrangements that are purely fun to sing, while some more complex settings that will be thoroughly rewarding for choirs and audiences alike.

A total of 26 fantastic works comprise The Novello Shakespeare Choral Collection, which would work as a wonderful concert programme on its own, or could provide a wealth of options for choirs looking to expand their repertoire with a range of unique settings. Also included is a fascinating introduction by editor David Wordsworth, and notes describing each piece.

Words written by indisputably the greatest writer in the English language can only be matched with music by composers of talent and renown such as these. The Novello Shakespeare Choral Collection is an essential anthology of stunning settings of beautiful words which will be performed and enjoyed for many years to come.