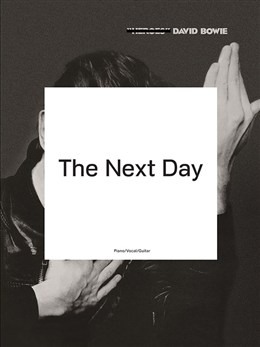 The Next Day BOWIE DAVID

(You Will) Set The World On Fire
Boss Of Me
Dancing Out In Space
Dirty Boys
Heat
How Does The Grass Grow?
I'd Rather Be High
If You Can See Me
I'll Take You There
Love Is Lost
Plan
So She
The Next Day
The Stars (Are Out Tonight)
Valentine's Day
Where Are We Now?
You Feel So Lonely You Could Die

Released to the surprise of fans, pundits and even Columbia Records' own PR department, The Next Day is David Bowie 's twenty-fourth studio album, announced on his sixty-sixth birthday. Containing Bowie's first collection of all-new material for over ten years, The Next Day débuted at number 1 and number 2 on charts across the world. A critical as well as commercial success, the album garnered five star reviews from Q , the Independent and the Telegraph , while the Guardian, Mojo, Rolling Stone and the Times gave it four stars. This matching songbook contains sheet music for all the tracks from The Next Day , including the singles Where Are We Now?, The Stars (Are Out Tonight), The Next Day and Valentine's Day . It also contains the songs from the deluxe version of the album: So She, Plan and I'll Take You There . All the songs have been expertly arranged for Piano, Vocal and Guitar.