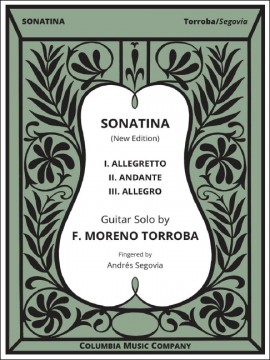 Composed in 1965, Moreno-Torroba's three movement Sonatina for solo guitar follows the traditional fast-slow-fast arrangement of movements. The first movement, Allegretto, opens with a joyous melody in a vibrant rhythmic pattern, the second movement embodies quintessential Spanish romanticism and displays the composer's mastery of lyricism, and the third movement, marked Allegro, returns the work to the vivaciousness it had in the opening movement. Though the piece is composed with all the complexity of a mature concert work, the omnipresent influence of Spanish folk music is never lost.