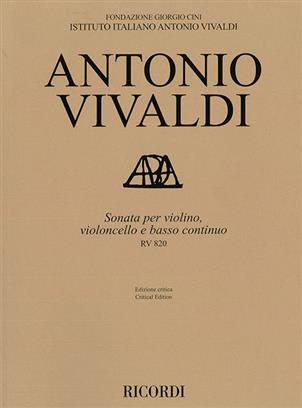 The sonata RV 820 represents two 'firsts': it is the latest work to be added to the Vivaldian canon, and it is also one of the oldest works by Vivaldi - perhaps the very oldest among those known. Having come to light among the numerous anonymous manuscripts preserved in the Sächsische Landesbibliothek - Staats- und Universitätsbibliothek in Dresden, it was attributed to him by Federico Maria Sardelli on the basis of several musical concordances with early works of known authenticity- in addition, a complex network of biographical and paleographical relationships has revealed how this sonata, copied in the hand of the very young Johann Georg Pisendel, belonged to an initial stock of compositions that Giuseppe Torelli brought with him from Italy after he was appointed Kapellmeister at Ansbach in 1698. In this context, Vivaldi's sonata finds itself in the company of two manuscripts that evidence early versions of two concertos that were later included in L'estro armonico ,, plus works by Torelli and his pupil Pietro Bettinozzi. From these facts we obtain a new picture that sheds light on on Vivaldi's period of apprenticeship and his debt to Torelli: from a stylistic viewpoint, RV 820 is an unusual type of trio sonata for violin and cello that remains structured in a late-seventeenth-century way, a work into which Vivaldi injects inventions that are completely new and individual. This is a rare jewel that reveals the work produced by its composer before he became himself.