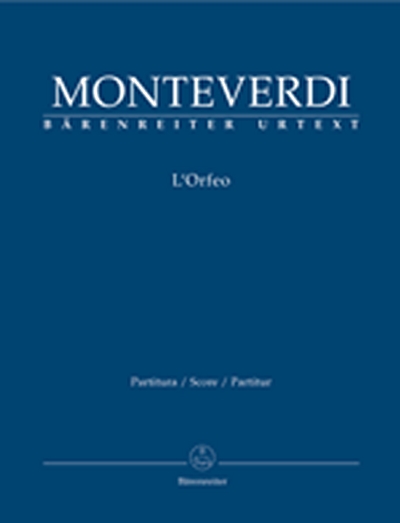 Monteverdi's opera ; L'Orfeo, based on the legend of Thracian singer Orpheus and his love of Eurydice, is a masterpiece of musical declamation and ornamentation. It was first performed during the 1607 carnevale in the ; Palazzo Ducale in Mantua. When an edition remains true to its sources, this certainly does not mean that it is not also practical to use, as is demonstrated in this Bärenreiter edition of Monteverdi's ; L'Orfeo. Edited by Rinaldo Alessandrini, the new publication follows the Bärenreiter edition of Monteverdi's ; Il ritorno d'Ulisse in patria. Two contemporary prints of ; L'Orfeo from the years 1609 and 1615 have been passed down to us. Four copies of each of these prints still survive today in public libraries. The later print includes many corrections to the earlier edition and was accordingly used as the primary source for this Bärenreiter edition. However, when solving musical problems the editor frequently follows the more coherent style of the earlier print. The numerous interesting variants, not only between the two editions but also amongst the eight surviving copies, are listed in the critical commentary. This edition of ; L'Orfeo offers in addition to Monteverdi's somewhat sparse original figures also figures added to the bass line by the editor. The continuo player should, however, feel free to follow his own judgment. The notation has been, when necessary, adapted to suit modern practice, for example with regard to the clefs. The sections that were originally written in ; chiavetta have been transposed a fifth lower. In the appendix these sections also appear in their original notation in facsimile as well as transposed a fourth lower. Detailed introduction by the editor (Ital/Eng/Ger) on the work's genesis and performance practice Comprehensive critical commentary (Eng) in the score Idiomatic piano reduction