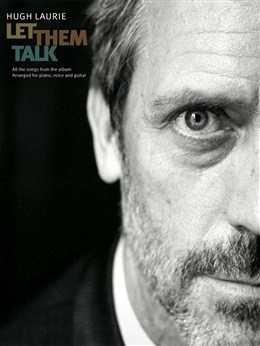 This matching songbook for Hugh Laurie 's debut album, Let Them Talk , includes all 15 classic blues songs, arranged for Piano, Voice and Guitar. British actor, comedian and musician, Hugh Laurie , has become a household name in his home country through his parts in shows such as Jeeves and Wooster and A Bit of Fry and Laurie , both comedic collaborations with Stephen Fry. More recently he has donned an impeccable American accent and played multiple major acting roles across the pond including the title role in the TV series, House . A talented musician and multi-instrumentalist, Laurie was often seen combining music and comedy in A Bit of Fry and Laurie . One such case involved a blues rip-off titled, "Too Long Johnny" which, although obviously poking fun, was nevertheless backed by an obvious natural affinity with this foundational music genre. With his debut album, Let Them Talk , Laurie returns to music and, more specifically, the blues, this time with a more serious take on the classic blues songs which have inspired him and, in the wider sphere, laid the foundation for popular music as we know it.