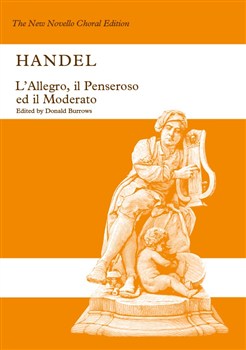 This complete edition of L'Allegro, Il Penseroso Ed Il Moderato features the 1740, 1741 and 1743 scores, reflecting Handel's personal changes, involving alternative and additional movements. The 1740 score is a complete reconstruction, requiring two Soprano, a Tenor and a Bass soloists. For the longer 1741 score, Handel added extra movements to accommodate additional soloists, the complete version of which is included here. Finally, the 1743 score boasts a radical change from the previous years, with a removal of part three and a significant rearrangement of other movements.

L'Allegro, Il Penseroso Ed Il Moderato was first performed on the 27th of February 1740 at the Lincoln's Inn Fields theatre, after just over a month of drafting. The work is a setting of a libretto by James Harris and Charles Jennens, based on John Milton's two complementary yet contrasting poems about the relative virtues of happiness and melancholy.

This edition of L'Allegro, Il Penseroso Ed Il Moderato presents practical versions of the score which are based on the musical schemes of Handel's performances in 1741 and 1743. For a complete vocal score of this masterpiece by one of the all-time great composers, this Novello Handel Edition is authoritative.