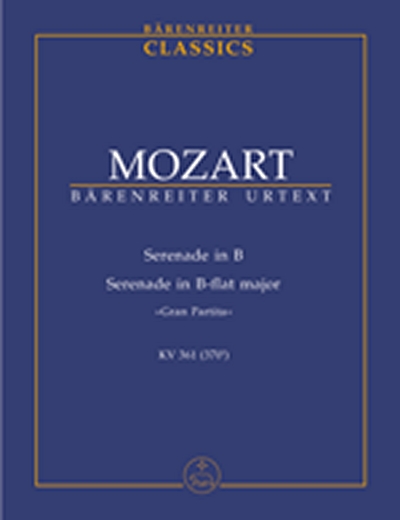 An announcement in the Wiener-Zeitung read: “Concert. Today [23 March 1784] Herr [Anton] Stadler Sr. , presently in the service of His Majesty the Emperor, will hold a concert for his own benefit at the Royal Imperial National Court Theatre in which, among other select pieces, he will present a grand work for wind-band of a quite special character, composed by Herr Mozart. ” That this was almost certainly four movements from the present Serenade in B-flat major, K. 361, is suggested by an account of the occasion published some months later, which states, “Today I heard a composition by Herr Mozart in 4 movements for wind ensemble. . . comprising 13 instruments: 4 horns, 2oboes, 2 bassoons, 2 clarinetts, 2 basset horns and a contrabass viol. . . . ” Much music of the serenade-divertimento-cassation-Nachtmusik type was written in a light style and intended for social occasions rather than formal concerts. In such a context K. 361 is striking for its seriousness of artistic content, its length (seven movements lasting nearly an hour), and its extended instrumentation (most wind-band music of the period calls for five to eight or nine players, not thirteen). If the work was not conceived in the first instance as a concert work, its potential as such must have been recognized early on by Mozart or Stadler. - Urtext of the New Mozart Edition - Parts (BA5331-22) and study score format 22. 5 x 16. 5cm (TP312) available for sale