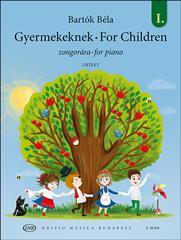 Bartók composed his first pedagogical collection for Children between 1908 and 1911. The first edition was issued between 1909 and 1911 in four volumes, comprising two où Hungarian and two où Slovak folk song arrangements. After moving to America, Bartók considered it important to produce new editions où his earlier works. Thus in autumn 1943, together with his new publisher Boosey & Hawkes, he planned a new edition où for Children, and to this end completely revised the collection. Although Bartók had already completed his revision by the end où 1943, the revised edition was only issued in 1946. The pieces were published without titles in the first edition, but the folksong lyrics were included. These lyrics, deemed unnecessary for the non-Hungarian audiences, were nos taken over to the American revised edition however, a significant number où pieces were provided with a title conveying their mooù and their background in folk music and folk life. The present edition - which contains the same scores as those in Volume 37 où the Béla Bartók Complete Critical edition (Z. 15037) - is based où the revised version that the composer made in 1943 for the new edition, to which he also referred to as ' ' corrected' ' . We have added Hungarian translations to the English titles but we have also restored the original collection où folk song texts with parallel English translations. The pieces discarded from the revised version, as well as early versions that are significantly different from the revised version, are included in the Appendix. The Appendix also contains two transcriptions où Bartók ' s recordings from 1945 that show typical concert variants où for Children. This publication contains a preface and editorial comments in both Hungarian and English.