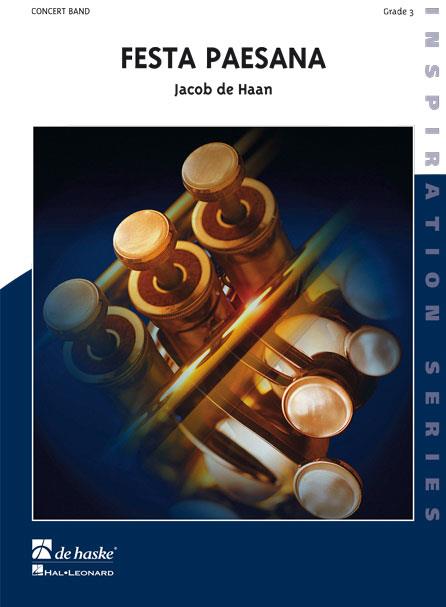 Lunteren, a village on the Veluwe (a wooded region in the Netherlands), sets the scene annually for a village festival dominated by folklore. Festa Paesana (Italian for village festival) is set to music by several folkloric sketches. The theme in Festa Paesana is partly based on a Dutch anthem (Wien Neerlands bloed); when other lyrics are used it is also known as the Lunteren anthem. The work begins with a festive introduction, completed by chimes and drums, in which pieces of the Lunteren anthem are heard. The music then transitions to represent a horse auction. We hear horses run their first rounds in the auction ring while being whipped. The following theme is partly basedon the anthem. The tension of the traditional auction is amplified by an ever-increasing cadence, reaching its climax when the word ?Sold!? is shouted. The night ends with a majestic variation on the Lunteren anthem. The next morning, when the tower clock hits seven times, the village is awaked by the reveille of the heralds. In a fugatic version of the anthem, we can hear the village slowly come to life. This evolves with the chiming of all towers in the village; the celebration can begin. Carriages drawn by horses rumble through the village and thus, it is easy to hear when a horse hesitates or runs amuck. A traditional folk dance group then dances a whirling waltz while the audience shares their pleasure. Musicians march along the scene and take over the waltz theme in their march. Until deep in the night, the musicians are still heard playing in the streets. Meanwhile, we hear the anthem theme being played in a choral variation (in minor). The first time it is played quietly, as a preparation for Sunday. Then it is played in a celebrating way, enabling the devout village residents to remember the past pleasant celebration with satisfaction.