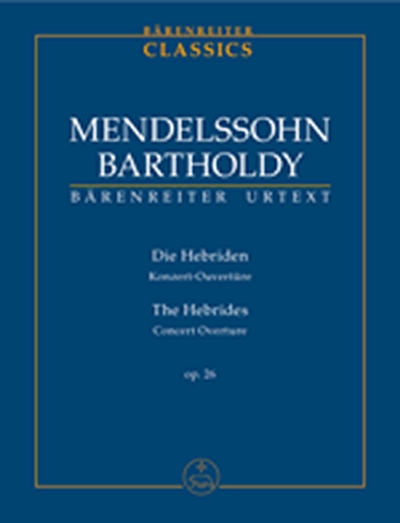 The Hebrides Op. 26 Concert Overture The Hebrides, the third in Bärenreiter's series of critical editions of Mendelssohn's great overtures, is one of Mendelssohn Bartholdy's most performed compositions. Previously this work was only available in one composite version: the Julius Rietz edition from the 1860s. The new Bärenreiter edition consist of two versions each containing additional material from further sources. Version one, the ; Rome version, exists itself in two versions and has never been published in a performing edition. Version two, the ; London version, also exists in two versions one of which was published by Mendelssohn in 1835. This pioneering edition documents the development of the composition and the various changes made by Mendelssohn. The new edition offers orchestras for the first time the possibility to perform this famous work based on all known sources. Score and large format orchestral parts with both versions back-to-back First ever Critical Edition Edited by Christopher Hogwood