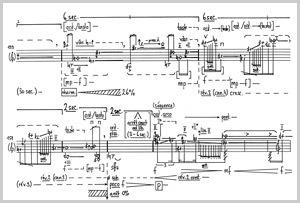 The viola solo courbe 2 is based on an excerpt from the viola part in the Trio for flute, viola and harp « courbes » – sequences. In the densest time curve of this piece the viola plays the leading role for a span of almost three minutes. This material is taken from the Trio, presented and divided into separate parts. courbe 2 is three times longer in duration than the Trio excerpt from which it is derived. The musical text of the individual fragments remains as it is in the original, but, “pulsating”, demarcated in seconds. Fissures emerge between the fragments, windows open: - to harmonic fields, central sounds, taken over from the reverberations, from which new tone materialis derived; the fields in turn are distorted and spacialised by the electronics - to metrical structures and pulses freed from the individual motives of the original musical text, which forms new variants in interaction with these fields. Thus in courbe 2 which, as already indicated, is three times longer in duration than the original, three musical levels are interpenetrated, whereby all three are derived from one tone, which plays an absolutely central role in most of my works. It is a reference to the French writer Anne-Marie Albiach [and to her great text « H II » linéaires], and it remains as the only tone at the end of the piece, definitively, determining everything, b = 247 Hertz. Walter Feldmann