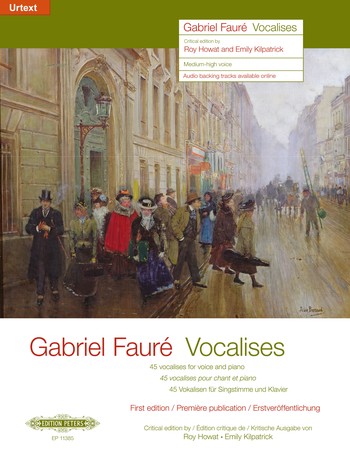 "When Gabriel Fauré was appointed Director of the Paris Conservatoire in 1905, one of his most pressing concerns - and first achievements - was a complete reform of the teaching of singing. He was determined to introduce mandatory study of art song, along with 'exercises developing vocal suppleness, articulation, and voice placement and production, which are the basis of singing teaching'. To this end, between 1906 and 1916 he composed a substantial body of accompanied vocalises for use in the Conservatoire's sight-singing examinations. For a century these vocalises - all but one now held in the Archives nationales de France in Paris - have lain unknown to the musical world at large. Their first publication here marks a major event for the vocal teaching repertoire (as well as some entrancing music)- a marvellous resource of skilfully devised vocal exercises ranging from elementary to advanced virtuoso level, all from one of history's greatest song composers."
- Roy Howat