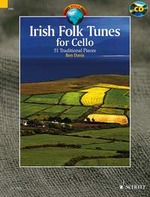 Cellist Ben Davis presents a collection of pieces for solo cello drawn from the rich tradition of Irish folk music. The collection covers a range of styles including Jigs, Reels, Hornpipes and Marches. The volume includes notes on the tunes, and is accompanied by a CD with a recording of all tunes. German and French translations of all texts are available as PDF downloads from the Schott Music website.
Suitable for players of grades 3-8.
Part of the bestselling World Music series, which also includes music from England, Ireland, Scotland, Eastern Europe, America, Argentina, India, China and Korea